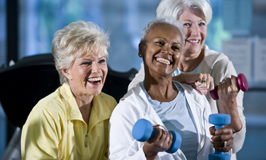 Don’t have time for exercise? Well, maybe you better find some. Otherwise you may find time and aging catching up with you before your time. Research substantiates what exercisers have suspected. Exercise can forestall many of the degenerative changes associated with aging and may help you live longer, too.

If your idea of exercise, however, is sweating, huffing and puffing till you feel like you’re ready to drop, the folks who study exercise’s benefits have some good news: Exercise that promotes health and longevity can take the form of unsweaty activities like walking or t’ai chi (a relaxed form of movement that originated in ancient China).

When researchers at the University of Minnesota recently looked at the lifestyles of 12,000 men, they discovered that those who walked or performed other similar activities for 20 minutes a day were almost 40% less likely to die of heart disease than the sedentary. Exercise improves the four big risk factors of heart attacks:

Do you enjoy gardening, bowling or golf? A seven year study of over 40,000 postmenopausal women published in the Journal of the American Medical Association found that those who often indulged in activities like these (or who simply walked frequently) were more than 40% less likely to die than women who eschewed exercise. Women who only engaged in activity about once a week were still about 30% less likely to die than women who almost never moved a muscle.

Although experts agree that all of us should exercise, they don’t agree on the exact amount of exercise you need for the greatest health benefit. But it doesn’t have to be much. A study of more than 60 people all over the age of 66, all of whom suffered from hypertension found that six weeks of t’ai chi reduced blood pressure significantly. The study, reported at the American Heart Association Conference on Cardiovascular Disease Epidemiology and Prevention, found that participants in a t’ai chi class lowered their pressure just as much as people who took part in much more stressful aerobics classes. At the beginning of the study, which took place at the Johns Hopkins School of Medicine, the people in the group reported that they had been exercising less than 15 minutes per week before the researchers began to teach them t’ai chi. The t’ai chi sessions lasted about 30 minutes each and were held four times a week. In a report on the study in the Medical Tribune, researcher Deborah R. Young, PhD, said “Our findings suggest that sedentary older people who perform even light physical activity may favorably affect their blood pressure.”

Medical researchers are so impressed with the benefits of exercise that, according to John W. Rowe, MD and Robert L. Kahn, PhD, in their book Successful Aging (Pantheon), “The most fit people, even if they smoke or have high blood pressure, are still at lower risk of death than nonsmokers with normal blood pressures who are couch potatoes.”

Along with exercise, those concerned about aging should be on the lookout to prevent shortages of several key nutrients:

The lesson: Get a move on to put the moves on aging. And protect yourself with nutrition and supplements.